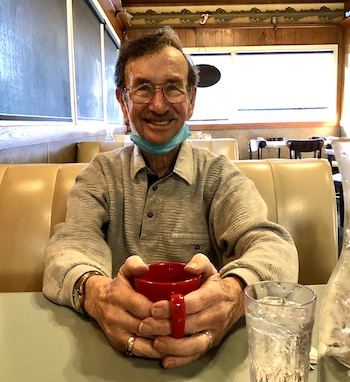 My father, Gene Adams, turned 90 on September 11. He lives in Walla Walla, in remote southeastern Washington state. I usually visit about four times a year but because of COVID, I hadn’t seen him since early February. I couldn’t stand the idea of not being with him to celebrate such a big day, but I also wasn’t comfortable flying there and potentially picking up and transmitting the virus to him. So I drove. It was a 4,000-mile roundtrip journey and I had a great time despite the weirdness of COVID-era travel. (I promise a post on the trip and the precautions I took.)

Perhaps the greatest part of the whole birthday was the gift I gave him. I say this as someone who is not a gift person. I rarely think of giving them and when I do, I have a hard time coming up with good gifts. The fact that he doesn’t need anything ratchets up the degree of difficulty. I was telling my friend Geralin Thomas about my quandary and she came up with a great idea that was a giant success.

Because of COVID, we couldn’t have a birthday party, which is what I probably would have done in lieu of a gift. Instead, I reached out to dozens of people from various parts of his life, asking each of them to send me a 30- to 60-second video wishing him a happy birthday and marking the occasion any other way they wanted to.

I used Trello to track my invitations and responses, which made it really easy. It was such a joy to communicate with these folks and receive their wonderful videos. People jumped at the opportunity to participate and I ended up with forty videos. I purchased an older iPad for him so he can watch the videos when he wants. (He’s a Luddite with no computer and no internet access and no desire for either.)

I put the individual videos on the iPad and also used iMovie on my Mac to string them all together into one video, which I put on the iPad. That turned out to be the way he likes to watch it most. Finally, I bought a lightning-to-HDMI adapter so that he can watch the video on his TV. I did everything manually and found it quite easy. (Since then, I have found out about a service that will send out the invitations and the compile the videos for you for a small fee, VidHug.)

He was blown away. Because he’s a Luddite he thought it was a lot harder for me to do than it actually was, though I tried to set him straight. He really enjoyed hearing from so many loved ones. The video was just plain heartwarming.

If you have an elderly relative you need a gift for, I heartily recommend this. Honestly, it was quite easy—and very enjoyable—to organize. Feel free to reach out if you need advice or tips!

Janine, I’m absolutely delighted that both you and your father enjoyed his 90th birthday and, that your gift to him was appreciated.