In knitting, WIP stands for Work-In-Progress. In my knitting reality, almost all my WIPS are actually stalled and/or abandoned projects. They languish in (mostly hand knit) bags in my knitting area creating clutter and a little bit of stress. That area was like a graveyard for knitting dreams.

But then I came across the book Untangled: A step-by-step guide to joy and success for the modern yarn lover by Shelley Brander Untangled and its chapter The WIP-It Challenge inspired me to go through and declutter all those bags.

It took the better part of a Sunday and it was so liberating! Here’s how I did it.

I gathered up all those bags. Here’s a photo of them—I had no idea there were so many. 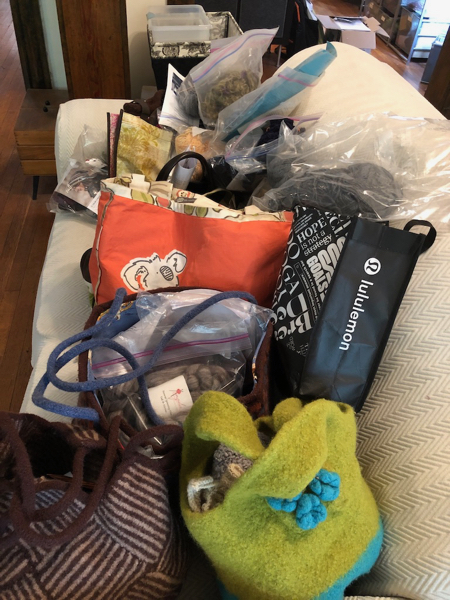 I ended up taking them to the dining room table and where the light was good, I went through them one by one. I started a little spreadsheet of each project, what yarns and needles it called for, the progress I’d made and what I wanted to do with it.

In all, I counted 15 WIPs. I let go of six of them, five of which I took off the needles and unraveled the yarn. That felt so good because that beautiful yarn got a new life, instead of being cooped up in a bag. I have a ball winder, so I had some very satisfying time winding all that yarn into neat balls. (See the picture below of the yarn I reclaimed in this project.) One of the abandoned projects was a toy I’d started making as a baby gift five years ago. I’d knit the component parts but before seaming them together, I realized that it wasn’t cute enough to give to the baby. I put it away thinking I’d finish it some day, I guess. Instead, I threw away all but the body and gave the body to my standard poodle, Bix, who thinks it’s a great toy.

Here’s a photo of Bix with the toy. He doesn’t care that it’s a reject. (In case you’re wondering, the finished toy was supposed to be Yoda.) 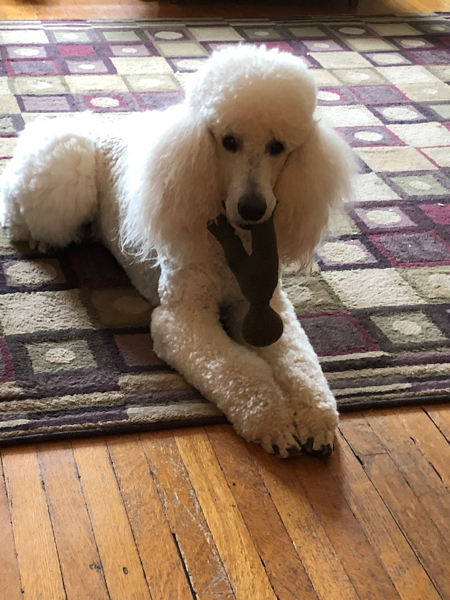 Here’s the reclaimed yarn! The photo doesn’t include the yarn that doesn’t thrill me, which I’d set aside to give to friends. 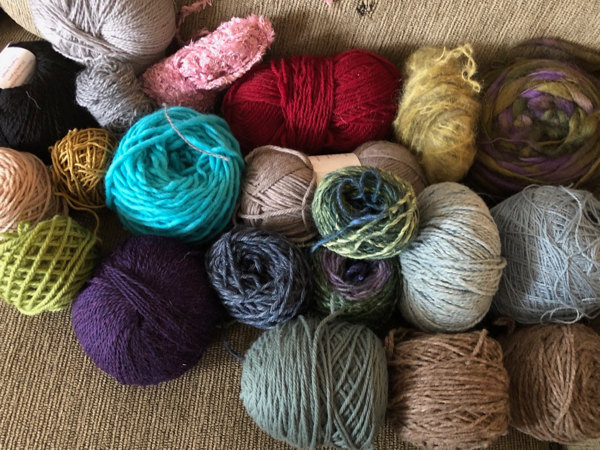 Of the remaining WIPs, four were fingerless gloves or mittens, with one finished. (There was also a pair of yoga socks with one completed.) I decided to hang on to those and finish them. There was a hat whose yarn I purchased to make a gift. I unraveled it and will start again. And there was a sweater whose yarn and pattern I had bought but had not actually starting knitting. I had completely forgotten about it (it’s very cool). So I’m going to evaluate the pattern and see if there was a reason I walked away from it.

One of the projects, was so close to being completed. It just had a tiny bit of seaming left to do. It was a striped cowl that I literally worked on for years. But when it didn’t end up as expected during construction, I walked away from it. But in the weeks after the big declutter, I actually finished it and now I have a cozy-warm cowl I can wear.

This process was absolutely rejuvenating. Not only did I get rid of a bunch of unsightly clutter, I let go of projects that were weighing me down, even if I didn’t realize it. I liberated yarn and needles to use in other projects. And I got excited about knitting again.

The day after this exercise, my co-host Shannon Wilkinson and I recorded an episode of our podcast, Getting to Good Enough, called Restarting that was all about this little adventure. If you’re interested in any more details of the knitting-project decluttering and its implications, please give it a listen!