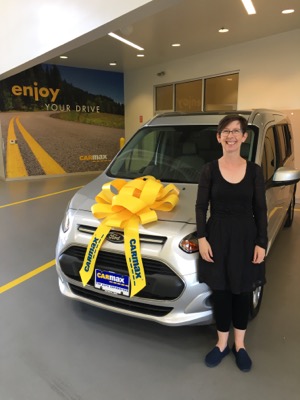 I bought a car on Friday, June 9! That doesn’t happen very often and it’s very exciting. I’m 54 and this is only my fifth car. There’s a picture of me with the new ride, taken at Carmax, the used-car dealership where I bought it.

I decided to get a new car because the car I was driving, a 2008 Honda CR-V with 105,000 miles on it, was getting a little long in the tooth and it didn’t have as much cargo space as I’d like. I carry around a lot of bins and storage solutions and it was sometimes a tight fit. This meant I had to schlep bins from my garage across my back yard and into my basement on a regular basis and I was getting tired of it. The lack of cargo space also meant I wasn’t able to help my team members take donations for clients when the client was letting go of a lot of stuff. So I was ready for a car with more cargo space.

The other reason I wanted a new car was that I sick and tired of walking around the open back doors of the car when I was loading up bins. I have a petite two-car garage. (This is a major factor in this story.) I decided I would benefit from driving a van with sliding back doors.

So what’s my secret for making car buying easy? Limit your options!

One of the hardest things for me about a big purchase (or sometimes even a small one) is dealing with all of the options. I’ve learned that I’m much happier making decisions when I have fewer options.

Going into this, I knew a few things:

Sifting the first four factors together, my research revealed there were about two cars that fit the bill. Hooray! My options were immediately limited.

Those two cars were the Ford Transit Connect Wagon and the Dodge Ran Promaster City Wagon. Both are city-oriented, smaller vans (I live in a city) and both are meant for passengers. My two-car garage was just big enough to accommodate the long wheelbase model of the Transit Connect. The other small van is the Nissan SV200 but it’s a cargo van only without a back seat.

I visited a Dodge dealership and test drove the cargo van version of the Promaster City. I quickly ruled it out—I was looking for more amenities than the Dodge offered. So I had it narrowed down to the Ford.

That meant I had two choices: Get a custom-made 2018 car and wait five months (and pay $30,000). Or buy a used car that is at least three years old. I chose the second option.

So I knew what I wanted. I just had to find it. I looked at craigslist to no avail. But I had a better choice. Carmax. I was able to test drive a 2016 version of the car I wanted and then have a 2014 with 23,000 miles transferred from the Columbus, Ohio, Carmax. I paid $250 for the transfer, but wasn’t obligated to buy it. That car had literally everything I wanted on it and then a little more. It was just under $20,000. The only thing I’m not crazy about is the color—it’s a boring silver. But it could be worse. They make it in a bright red that I really don’t like.

Carmax made everything really easy. And it was a no-haggle, no-pressure situation. I sold my CR-V to a friend and brought home the new Transit Connect just a few days ago. I’m tickled pink.

I started my research on May 27 and brought home the car on June 9. For me anyway, that’s fast and painless.

So my secret to easy car buying is to figure out your wants and needs and limit the options to those things. Then find that car, buying used if necessary. Usually compromises need to be made, especially when you’re buying used, but in my case I made none, beyond the color.

I’m hoping for many good years with this van!

Janine! I am so sorry that I forgot all about your new car when Penn and I came over to play!!! I was so excited since that is something that I am considering. I want to hear way more about it, maybe when I can walk again we can have a chat, or better yet, since I can’t walk, a “test drive” <smile!>. I am so happy and proud for you, thanks for sharing, will def! be looking into your recommendations, Dorene