The joy of finishing the long-delayed project

This past weekend, I experienced the thrill of an empty basement in my own home. My husband and I live in a two-family home built in 1908. (We used to rent out the downstairs apartment, but now we live in the whole thing.) It has a scary unfinished basement that I joked was straight out of Silence of the Lambs. The limestone foundation walls and plaster-and-horsehair dropped ceiling shed dust onto the floor that is so bad we have special “basement shoes” so we don’t track dust around the house.

It’s a big basement and, like so many other people, we would just take stuff down there, storing it willy nilly, rather than making the decision to dispose of it. The washer and dryer are in the basement, so I actually had to look at the unruly mess at least weekly.

In 2009, we hired a professional organizer, Karel Worley, to help clear out that basement. The results were pretty spectacular but after six years of not changing our dumping behavior it had started to look cluttered again. Then matters got worse when the basement floor started heaving due to hydrostatic pressure. So we had no choice but to clear out our basement for repairs and renovation.

The work started this week, so this past weekend, we did a thorough clean-out of the basement. It felt so good!! There were many items down there left by the sellers in 1992 that we didn’t deal with in our 2009 purge. There was stuff in the little under-the-porch storage room the we didn’t even know were there, like the sellers’ college textbooks. There were also some solid six-panel doors and glass-paned cabinet doors. We sold those to neighbors and netted $225.

For four hours, Barry and I went through the stuff. We kept so little that it all fit into the two under-the-porch storage rooms, which will not be affected by the renovation.

I took a carload of stuff to Goodwill. Then we had 1-800-GOT-JUNK come and take away an entire truckload of junk. It was thrilling!

The next day we had Paint Away come and take away the dozens of paint cans (and some other old household products) that had been languishing in the basement. I had no idea there were so many paint cans down there, because they were scattered in little pockets of cans all over the place. Working with both 1-800-GOT-JUNK and Paint Away was a fantastic experience.

At the end of that weekend, I was practically giddy with the joy of getting that stuff out of the house. I didn’t realize how much it had been weighing me down for 23 years. I almost felt like a physical load had been taken off my shoulders.

At the risk of embarrassing myself, here’s how the junky side of the basement looked before we decluttered.

And here’s a picture at the end of the weekend. 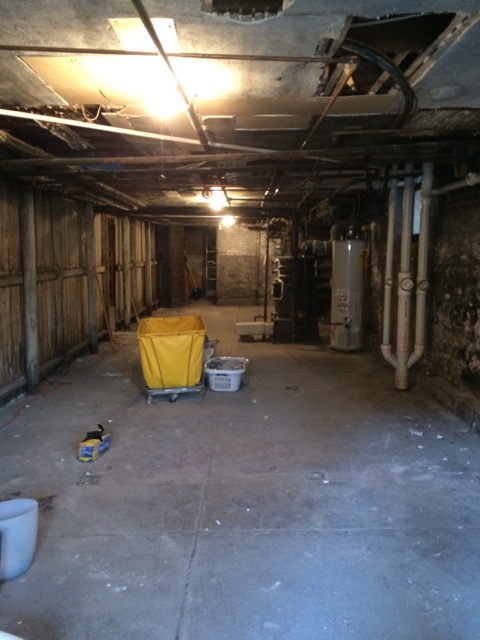 This week, that wall on the left of the photos was removed to open the two sides of the basement and now it looks completely different. The drop ceiling was also removed. The next step is removing the floor, adding a waterproofing system, then replacing the floor. Then we’ll have the walls painted with waterproofing paint, improve the lighting and do some more sprucing up. We won’t have a finished basement (we don’t need one), but we’ll have a dry basement that we can wear our street shoes in. It’s very exciting.