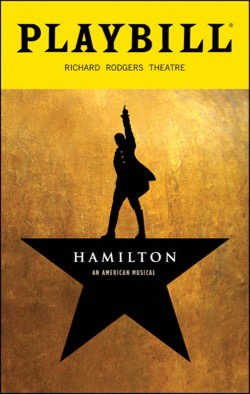 Can't wait to hold this Playbill in my hand!

On Friday, October 21 I watched the PBS documentary about the smash Broadway musical, Hamilton. Of course, I was aware of the phenomenon Hamilton—it won a bazillion Tony awards and made news because tickets are impossible to get. But I had never listened to the music. I knew a lot of it was hip-hop and I did not have much of an appreciation for hip-hop, so I hadn’t bothered.

I’m so glad I watched that documentary to see what all the fuss was about. I immediately downloaded the 46-song original broadway cast soundtrack from iTunes and have pretty much been listening to it non-stop since. Well, not quite non-stop, because I have taken breaks to watch the 90-minute documentary three more times and pretty much every Hamilton-related YouTube video I can find. In one video, I heard First Lady Michelle Obama call Hamilton “the best piece of art in any form that I have ever seen in my life.”

The reason I bring it up here is to encourage you to watch the documentary or listen to the soundtrack if you haven’t already. Its brilliance is inspirational. And it’s so enjoyable. The documentary is freely available to watch online, but only until November 18. So don’t delay.

To make it easy for you to become a Hamilphile, I offer these links. (Just a selection of the many opportunities there are to hear/watch/read about Hamilton.)

I now, of course, really want to see the musical on stage, though I don’t think I’m prepared to shell out hundreds of dollars per ticket. Hamilton is playing on Broadway, of course, and there’s also a production in Chicago. Next year there will be a touring show, which is supposed to come to St. Louis. I don’t want to wait that long. So I’m entering the ticket lottery each day for two of the limited number of $10 tickets available for the Chicago performance. Chicago is about a five-hour drive from St. Louis and the same-day tickets for the 7:30 performance don’t become available until 2 pm, so I’d be cutting it close. But every day I’m available I enter. I’m determined that it’s doable.

If you’re obsessed too, please tell me: Have I missed any videos, books or articles? Let me know in the comments!

ETA: On April 20, 2017 I saw Hamilton performed in Chicago! I bit the bullet earlier this year and bought (great) tickets. It was an incredible production and didn’t disappoint. I hope to see it again some day!

ETA: On September 30, 2017 I saw it in Chicago again! My niece was visiting from Australia and wanted to see it. Who was I to say no?

ETA: On April 18, 2018 I saw it for a third time! The touring company had come to St. Louis and I couldn’t stand not seeing it when it was being performed 2.5 miles from my home. So I bought a ticket for an amazing tenth-row-center seat just two days before the performance for a (relatively) paltry $150. The show still amazes and delights me. I’d see it again in a heartbeat.

ETA: On September 1, 2019 I saw it in Chicago again! This time I (finally) won the ticket lottery and saw it from the second row for only $10. It was amazing from that vantage point!! Can’t wait to see it again.

Angie, thank you for mentioning those videos! I looked at one or two and then I forgot about them. I’ll definitely check them out!

I have watched the Y tube videos,the PBS making of Hamilton show and hav seen it in Chicago Ticket price wasn’t so bad, but availability of good tickets is impossible I highly recommend it No one in the audience was unenthused or uninvolved. It is a truly new art form and history made live

Peggy, that’s fantastic. You’re making me all the more anxious to get a ticket! Thanks for commenting.