I spent the day yesterday working with a client on years of accumulated paper so this post, in which I discussed liberating myself of excess paper, resonated with me today. I wrote this post in October 2015 and have not missed a single piece of paper I let go of during that purge four and a half years ago! 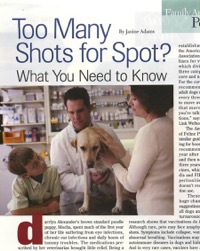 Over the weekend, I faced down the challenging of decluttering a file cabinet full of old papers and memories. I love having these experiences that put me in my clients’ shoes and help me better understand what they’re going through.

A number of years ago, I moved my office four-drawer filing cabinet into the basement, replacing it in my office with an Elfa file cart. I didn’t bother decluttering the stuff that moved to the basement with the file cabinet. It was all papers related to achievements in my first two (and only) jobs, as well as administrative and project files from my decade as a dog writer, along with over 100 files of newspaper and magazine clippings of published articles I’d written.

They might have sat there until we moved, except that we’re doing a big repair and renovation in our basement, so the file cabinet has to be moved several times. It seems like a good time to (literally) lighten the load in that cabinet.

So I went to the basement and started going through the files. It was a fun and sometimes sad trip down memory lane. The tricky part was much of the material in that file cabinet pre-dated the worldwide web as we know it so isn’t available online (or at least not easily). I always caution people to give some thoughtful consideration to discarding irreplaceable items, but I also tell them that the more sentimental items they keep, the less value any of it has. So I was experiencing the push-me-pull-you of those two factors.

In the eighties, I worked for a non-profit on an international project that involved publishing magazine supplements in magazines around the world. I had a copy of each of those supplements. They really don’t have any value for me—in thirty years I’ve never once been asked about them. Yet they evoke some fond memories. (I traveled around the world and met those magazine editors.) And I don’t think they exist in digital form. What to do?

After a little thought, I decided to keep one of them and recycle the rest. That felt a little scary but also gave me that great feeling of lightening the load.

My next job was doing media relations for the Missouri Botanical Garden and I had kept some important clippings I’d placed. Back then I was able to garner some pretty significant attention for stories that felt like a very hard sell. Those clippings and the news releases I’d written to place them could be handy if I were every seeking a job in media relations. But the likelihood of that is close to nil. So I ended up keeping a little portfolio I’d created back then and recycling everything else.

Then I came to the more recent career—all the files from when I was a dog writer from 1995 to 2005, when I started Peace of Mind Organizing. I threw away all past project files, which was a pretty easy decision. Then I dealt with the clipping files. I wrote something like 150 articles and back in those pre-internet days one mailed photocopies of clippings with query letters to try to get magazine assignments. So I had made a bunch of copies of every article I published. Only laziness had stopped me from getting rid of the extras years ago. Yesterday, in the spirit of lightening the load, I kept one copy only of the more significant articles, like the ones that appeared in national magazines (I wrote quite a bit for Family Circle—that’s part of one of my favorite Family Circle articles in the photo above), the columns I wrote for a now-defunct magazine and a now-defunct website, and the articles for which I won awards. I went from hundreds of files to a single, fairly thick, file.

Going through this process was a great mental exercise. I got to revisit some achievements, which is always fun. I cried when I read the column I’d written after our dog, Scout, died in October 2001 and the one I wrote after our other dog, Kramer, died in December 2001. It made me appreciate, as I probably didn’t at the time, that those articles probably helped others who were grieving the loss of their pets. I’m glad I kept hard copies of those because they’d be tricky to find online.

Do you have ancient files or other memorabilia lurking somewhere in your house? I encourage you to bring them out into the light and go through them. You may jog some really fond memories. And you find it easier than you think to let go of this particular type of excess. Trust me, it can be liberating!

It’s nice to do a review of your career. I keep a business card from every job I have had. I also keep some papers and then realise what a waste of space.