Worth repeating: The key to finishing my big knitting project

I was taught to knit by my mother and grandmother when I was a child. But I put down the needles in college and didn’t pick them up for 20 years. One of the first projects I did after re-learning to knit was Barbara Walker’s Learn to Knit Afghan. It took me two years to finish knitting the 63 squares of the afghan. A year later, with the help of friends, I figured out a pretty layout for the squares and seamed them together. (I used only 48 of the 63 squares.) I started a knitting a binding around the edge. And that’s where the project stalled. In 2016, I finally finished that afghan and I am so darned proud of it. Today, I’m re-running most of the post I wrote about it at the moment of completion in 2016.

I bet I hadn’t touched the afghan between 2010 and 2016. In 2010, I placed it in a bag and put it in the closet because (a) knitting the applied i-cord binding was unbearably tedious and (b) I didn’t even know what I was going to do with the afghan when I was finished.

All that changed in October (2016). My knitting group now meets at the City Sewing Room a wonderful place for people who sew to use sewing machines (and other sewing accoutrements) and get advice. You can also have alterations and special projects sewn for you there. On October 19 when I was there, I saw that Anne, the owner, was sewing a flannel backing to a knitted baby blanket. My antennae immediately went up.

With the encouragement of my crafty friends who were there—and who helped me lay the afghan out way back in 2009—I talked with Anne about the possibility of her sewing a flannel backing on my much larger afghan. She said that wouldn’t be a problem. When I lamented that I still needed to finish knitting the binding, she mentioned that she could sew a flannel binding on. Sold! In no time, I ripped out the binding I’d already knitted. It felt great.

Two weeks later, I’d purchased and washed flannel and brought it to Anne, along with the clean and blocked afghan. I now have a beautiful, cozy afghan I can sleep under in bed or lie under on the couch. Last evening I used it as a lap blanket.

Here are a couple of photos. It feels like a miracle. 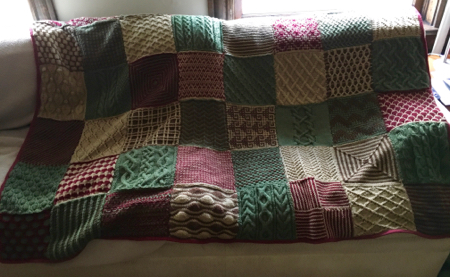 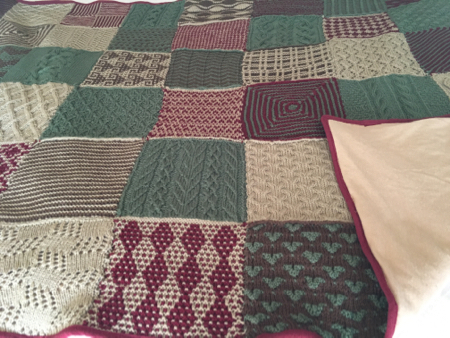 I got to thinking about how this happened and realized the key:

Impossible projects become possible when you enlist the help of experts.

For me, binding that afghan and then figuring out how to make it useful (it’s wool and too itchy to use without some sort of backing) was an insurmountable hurdle. For Anne, it was no big deal, just a few hours work. Just like laying out the afghan felt impossible to me but was easy peasy for my crafty friends.

The same is true for clutter or all sorts of other projects. My team and I come in and, in a few hours, help clients transform spaces in their home that had felt impossible to tackle on their own.

I am so happy to have this project completed and so glad I found an expert to help me. And I’m very grateful to Anne and my craft sisters for helping me make it happen!