I recently signed up for the fabulous Workspace and Studio Redesign program offered by Jen Hofmann of Inspired Home Office.

In the eight years since I last rearranged the furniture in my home office, I’ve spruced it up a couple of times (with the help of friends), but I’ve been feeling like I’d like to change it up a bit more. When I read about this program, I hopped on board.

Jen and I had our first session last week and she helped me realize that I have a lot of extraneous stuff in my office. While I had worked on clearing out and organizing the two closets in my office, I hadn’t done a thing about my desk, which was starting to close in on me. Stuff was there by default.

(Incidentally, I think one of the reasons I’ve been having trouble keeping up my clean desk habit is that so many things actually were residing on my desk that the clear space felt like it was shrinking.)

My assignment from Jen was to touch everything on my desk, as well as the stuff I can see while I’m working, and evaluate it based on the question, Does this represent who I am and where I’m going?

On Saturday, I got to work and it was absolutely liberating! I have a teak desk organizer that we bought in the early 90s. It’s been on various desks in the house, and on this desk in particular since at least 2001. I realized in talking with Jen that there were only about four things in it that I actually used on a regular basis.

So I took it off my desk. Now my desk contains only the essentials. I did keep a little decorative dish that contains sea glass I picked up on my trip to Barbados in November. And I added a felted-wool bowl I knit that at the moment contains my Valentine’s candy. Those two things make me happy.

Here’s a set of before and after photos. 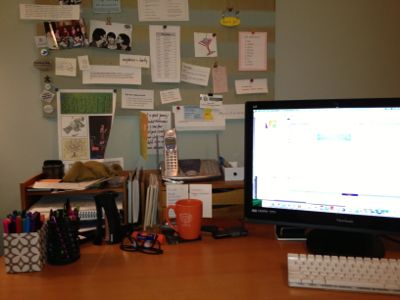 Talk about more visual peace! As you can see, I also cleared off much of the stuff on the bulletin board above my desk, though I haven’t exactly artfully arranged it.

There will be more evolution (I have two more sessions with Jen), but I had just to share the progress I made in a just a couple of hours on Saturday.

It’s been amazingly easy to keep my desk clear since then. (I’m so motivated!) In the morning, my uncluttered desk greets me with open arms.

I love your transformation so far. In my first session with Jen we made the closet the top priority. I haven’t quite finished it yet. Your progress is inspiring me.

It is amazing to have a fresh pair of eyes! I have sea glass too – from a Mexico trip. Think I will put it in my office where I can enjoy it everyday. Thanks Janine!

Sandi, how fun that you’re working with Jen too! I’m very excited and I’m awfully glad that you found my blog post inspiring!

Steph, thank you for your comment! I love looking at my sea glass and remembering the beautiful beaches of Barbados. Before I did the big desk clean up, they would have just blended in with everything else. It’s like a little reward for my efforts.

What a useful question from Jen! Thanks for sharing your process. This seems really useful and inspiring to me.

You’re absolutely right, Paulita! That was a really powerful question and so helpful to me. Thank you for your comment!

Nice transformation, Janine. It’s interesting what we get used to. Our eyes adjust to the visual scenery, yet when we stop to ask the important questions, we then begin to really see. I’m looking forward to bit of office redo in the coming months. Very exciting. Thank you for the continued inspiration both at the desk and with the email “inbox.”

Thank you for your comment, Linda. It’s amazing how things become in invisible. I’m so glad I can provide a little inspiration for you, as you do for me!

Wow Janine: your office looks amazing! Thank you for sharing the before and after photos.

Thank you, Maureen! It’s so nice to hear from you.

This only just now popped up on FB again and served as an excellent reminder that I really need to redesign my office so it is more efficient desktop wise AND uses all the space better. I think I need a new design and I’m finding this very inspiring.

So glad it’s helpful, Lucinda! I was amazed at what a difference turning my desk 90 degrees made. And, of course, getting rid of all the extra stuff.